Woke up “relatively” early to a beautiful day in the Pyrenees: mountains all around. Today, after the picnic at noon in Port de Castet, we were headed out towards GR-10 trail close to the border of Spain, en-route to Pic Midi D’Ossau. It will be just T, K, D and I. Getting excited, we were gearing up, going to the grocery story where we bought too much food (as always), and some gifts to take home. While we’ve been in France, D and I have completely broken our diets, eating bread and cheese almost every day. I still refrain from eggs for the most part. So far we have experienced little to no side effects, having regular bowel movements. D’s even been eating pork.

Lolo was so welcoming, allowing us to use her new car when we needed one and we also borrowed sleeping bags, a tent and pads from her. Plus her most favorite 49L backpack since I didn’t have one big enough. The brunch was left over food from yesterday, enjoyed on a wide plateau 5km east of her castle-like house in Castet. As the four of us drove up in her tiny white Dacia, we had more and more expansive views of the opposing mountains. 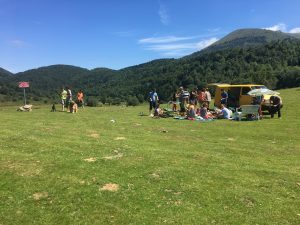 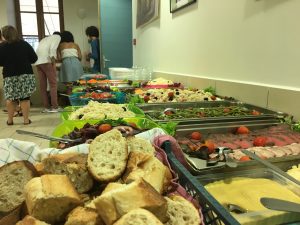 At the top, we were treated by a loud eew-haw from the next door donkey and grazing horses with cowbells chiming across the field of soft green grass – the type you would want to roll around in – except for the minefield of fresh and sun-dried cow pies. Paul had driven his yellow camping van to the middle of this open pasture, and dished out the boeuf-roti, ham, fromage de brebis, carottes-rapés, haricots vests, among many other delicacies of the region.

We found the beer tap in the basement, next to the “dungeon” dormitory we slept in that night, and brought over a bottle to everyone’s delight. The mood was very relaxed, a lazy dimanche après-midi in South France. 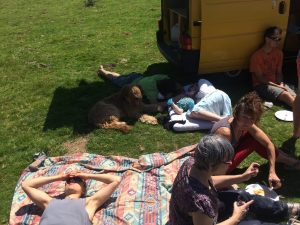 After a large plate of food, a glass of juice/beer/wine, we lazed around in the sun, the chilly breeze whipping up light goosebumps on my skin. In the distance, colts rolled about in the dirt, hooves kicking the air. A bit closer, dogs licked the remainder of plates to their owners’ nonchalance, and babies hummed softly as they learned the art of the afternoon “sieste”.

Packing up, the drive to the Pic began – first in a wide valley, then detoured through a village where we got stuck behind a tractor and some herders herding two cows (which decided to take a nice shit right in front of the car, our wheels squishing through the moist manure seconds later). Finally back on the main road, it narrowed between a deeper canyon on the right, and steepening walls on the left. 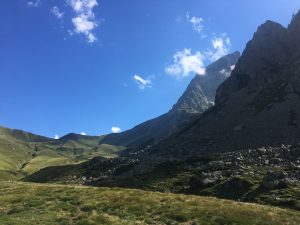 Noses pressed to the passenger glass window, we arched our necks up to see the tippity-tops of rocky peaks peeking out left and right. Parking the car at a lake we were originally going to hike to (we weren’t sure if the roads were open), I was really jumping up and down in excitement watching other people mull around with packs, hiking poles, and climbing gear. It was so great to be out here, the Pyranees where I had spent my 23rd year of life, six years ago. 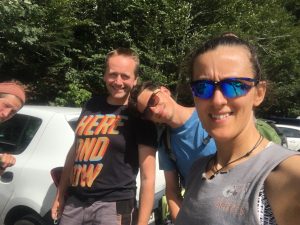 This time it was with my life partner and two of my favorite people in the world. We even brought a rope, as we expect the peak to be a series of easier 5.3- 5.4 climbs – which we will do tomorrow. Six and seven-tenth km, rolling hills, many sheep, cows, and horses in the shadow of high-jutting peaks later, we reached the refuge de Pombie at 2032m.

Nearby was a lake and farther, awe inspiring views to mountains in the east turning orange, red, then purple in the reflection of the quickly approaching sunset. Tent set next to a stream of water, we finished 1.5 L of wine and nearly a full bar of hazelnut chocolate before retiring to bed. 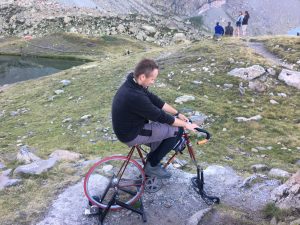 PS: there was a bike to recharge non-iphone mobiles (Pedal to create electricity) and T & K found the coolest camp spot under a 45degree angle boulder. They called it their “living room 🙂