A little note: This interpretation uses a kind of metaphor that like most metaphors, may not work 100% of the time. When I define something in this world, just accept it. (i.e. if I say in this world, all humans have one arm, just go with it, and imagine the world with one armed humans as normal.) 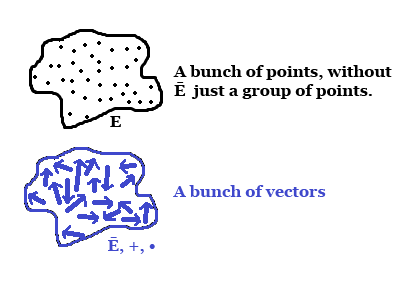 Above I have drawn two worlds of random sizes, one of them is made up a ton of points, and the other of a bunch of vectors (directions). The + and • next to Ē means that these vectors can be added and multiplied without losing the characteristics of Ē. Think of Characteristics as a genetic trait… so if two humans mate, they have the same genetic “properties” – saying that their kid (in a perfect world we’re used to), just like the two of them, will have only two eyes, one mouth, and one nose (yes they may be different sizes and shapes, but that doesn’t change that there are two eyes for example).

Going back to E and Ē. These are “spaces” in mathematics, but we will equate them with two worlds. Each point lives in his little house on E, and each vector lives her life peacefully in Ē.

One day, a point in E we’ll call Manfred, and a vector in Ē called ūlina meet. Instantly they fall in love, and get married. But in order to do so, they have to enter a car (in math known as an application), called psi Ψ, which takes two elements from the worlds of E and Ē and creates a new one called “Affine Space”.. so romantic, I know.. but it has some sense; after all, the word “Affine” comes form the Latin word affinis which means “connected with”[1].

This Affine plane (another space/world) contains both Manfred and ūlina, and every other pair of point-vectors that have decided to marry. This new and wonderful world makes it possible for Manfred and ūlina to mate. Us mathematicians are quite lazy, so instead of writing out: “Manfred and ūlina have mated”, we write M

ū. M stands for Manfred, ū stands for ūlina, and that odd plus sign means “they have mated”.

Naturally, we’d like to know what the heck a child of a vector and point will be. Well in an Affine space, Manfred and ūlina’s child will only have the characteristics of Manfred – in other words, he will be a point. Conveniently, the result of M

Ah but this means that a child will never be female, and never be like ūlina. And sadly in this world, that’s the way life is.

Going back to the Ψ – car. Before they can get out of this car, the point Manfred and vector ūlina will have to have mated, and given birth to Norbert.

I note that N (Norbert) can only have M (Manfred) and ū (ūlina) as parents… that is, biological parents. In addition, in this world it is quite sad, but M and ū can only have one kid N. (the car Psi (Ψ) is a vehicle of BIJECTION: a one-to-one relationship)

Also, sometimes, like humans do, a point M falls in love with 2 vectors, ūlina and ānna… so what happens when he tries marrying both?

Well, this can’t be possible in the world of Affine Spaces, it’s like trying to inhale and exhale at the same time. So, when M and ū + ā(ānne) hop into the Ψ-car, since there are more than one females, there has to come out more than one child.

Us humans would say, well then duh, Manfred is a lucky man, he would just mate with ūlina and then impregnate ānna, wait till they pop out Norbert and Paprika. WRONG. Remember when I said Manfred and ūlina can have only one child? Well, that still is true, so how else can two kids come out of the Psi-car?

in fact, time is not an issue in this world. ānne can wait her turn to mate with Manfred and ūlina’s child Norbert once he is born, then wait till Norbert and ānna’s child Paprika is born before they all step out onto the affine plane. So in mathematical symbols, this looks like so:

1. When A point and vector mate, they can only produce one and only one child. Conversely, a child (or point) can only have one vector as mother and one point as father, and no other ones.
2. When M falls in love with 2 vectors, the application of M and the two vectors is the same as the application of the application of one vector then the other which ultimately results in a second child P… this will become clearer in the next section.